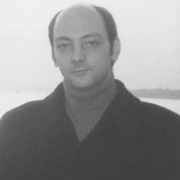 Italian composer born in 1970 in Milan.

Born on 13 March 1970 in Milan, Andrea Vigani is a violinist and composer of chambre, vocal, and electroacoustic music. He has performed widely in Europe and the United States.

Upon graduating in violin, composition, and electroacoustic music from the Giuseppe Verdi Conservatory in Milan, he pursued specialised studies in string quartet and chambre repertoire, as well as composition, at the Fiesole Music School (Italy) and at the Chigiana Music Academy in Sienna. He also studied with Peter Eötvös at the Eötvös International Institute in Edenkoben (Germany). Finally, he studied electroacoustic music at IRCAM.

He has collaborated with choreographers such as Lindsey Kemp, on Special guest: Lindsay Kemp (1995), premiered at the Teatro dell’Unione in Viterbo (Italy); Carolyn Carlson and Gavin Bryars, on Waltz thru time (2002), premiered at the Malibran Theatre as part of the Venice Biennale, with a subsequent performance at the Théâtre de la Ville in Paris; and Yuval Pick on Strand behind (2006), premiered during a co-residence at the Lyon Conservatoire (CNSML) and subsequently performed at the Agora Festival at IRCAM in 2006.

He has been commissioned by IRCAM, the Arena Foundation in Verona, Ensemble Aleph, Milan Conservatory, the International Mozart Festival in Rovereto, and the United Europe Chamber Orchestra. His works have been broadcast on the BBC, Radio France, SWR, NRK (Norway), RAI 3, and Télévision Suisse Romande, and are published by Suvini Zerboni, Tau Kay, Agenda, Rugginenti, and Nuova Stradivarius.