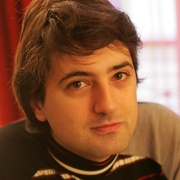 Mantovani has received numerous accolades, both in international competitions and for recordings of his works, including several “Coups de Cœur” from the Charles Cros Academy, a “Choc de l’Année” from Monde de la musique, and inclusion in the New York Times’ list of the “Top 10 CDs of 2008”. He became a Knight of the Order of Arts and Letters in France in January 2010.

Mantovani has collaborated on multiple occasions with the Paris National Opera, giving rise to the ballet Siddharta (2009); Akhmatova (2011), an opera based on the life of Russian poet Anna Akhmatova; the violin concerto Jeux d’eaux (2012); and Carnaval (2014), a trio for clarinet, cello, and piano.

He is also active as a conductor, and has led ensembles and orchestras including Accentus, Alternance, Sospeso, TM+, the Lille, Lyon and Capitole de Toulouse National Orchestras, the Paris Orchestra, and Ensemble Intercontemporain.

Bruno Mantovani was named Director of the Paris Conservatory (CNSMDP) in 2010. His scores are published by Henry Lemoine Editions.