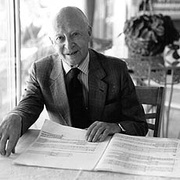 Witold Lutosławski studied piano and violin, and, starting in 1927, composition and music theory with Witold Maliszewski (a former pupil of Rimski-Korsakov) at the Warsaw Conservatory and in Hamburg. He also attended Warsaw University, where he studied mathematics. In 1936, he graduated with a degree in piano performance, and the following year, in composition.

His hopes of pursuing further study of composition in Paris were dashed by growing political tensions in Europe. Captured and interned as a prisoner of war by the Germans in 1939, he escaped and subsequently earned a living as a pianist, playing in cafes in Warsaw from 1940 to 1945, alongside fellow pianist and composer Andrzej Panufnik.

The majority of his early pieces were lost in the Warsaw uprising of 1944. In addition to composing piano and chamber works, during this period he became interested in Polish folk music, making arrangements of several pieces. His knowledge of this tradition would be applied throughout his career, notably in his teaching, but also in his efforts to promote the musical culture of his homeland. His final work before the invasion of Poland, the Symphonic Variations, while betraying the influences of Stravinsky and Szymanowski, was nonetheless a testament to the composer’s talent and creativity, and the piece was subsequently reperformed on several occasions in Paris after the war. From 1941 to 1947, Lutosławski worked on his First Symphony (premiered in 1948). Dismissed as “formalist” by the Soviet authorities, the piece was blacklisted during Stalin’s rule.

Lutosławski nonetheless continued to seek an idiomatic aesthetic in his music, while also composing neo-Bartokian pieces (such as the Dance Preludes) which were sanctioned by the authorities in Soviet-controlled Poland. Musique Funèbre for string orchestra (1958) represents a major milestone in this stylistic development. Based on a twelve-tone theme, it creates an atmosphere of profound tension through the use of total chromaticism (in the form of aggregates and clusters), aligning it much more with the music of the Second Viennese School than that of his Socialist Realist colleagues. However, Lutosławski never fully adopted the aesthetic and pointillistic textures of the serial music of his time, instead progressively developing a highly personal, “open work” approach in which performers are given a certain level of freedom in their interpretation of notated material. This approach — which came to be known as the “controlled aleatoric method” — reached a new level of refinement in Jeux Vénitiens (1961), the work which cemented the composer’s international standing.

The thaw in relations between East and West resulted in a surge of interest in Lutosławski’s work in Western concert halls, which, in turn, gave rise to a string of commissions. He subsequently travelled to the United States and Great Britain where he taught and also gained broad recognition for his prowess as a composer. Notable premieres in the following years included his String Quartet (1964) by the LaSalle Quartet in Stockholm; the Livre pour Orchestre in 1968 in Hagen (Germany); Mi-parti at the Concertgebouw in Amsterdam in 1976; and Novelette in Washington, DC in 1980.

He composed works, which have since become classics, for esteemed soloists including Peter Pears (Paroles tissées, 1965), Rostropovitch (Concerto for Cello and Orchestra, 1969-70), Fischer-Dieskau (Les espaces du sommeil), Ursula and Heinz Holliger (Double Concerto for oboe, harp, and chamber orchestra, 1969-70), Anne-Sophie Mutter (Chain 2, a “dialogue” for violin and orchestra, 1984-85, and a version for violin and orchestra of Partita, 1984-88), and Krystian Zimerman (Piano Concerto).

His Fourth Symphony, a work which epitomises the Lutosławskian concept of the “expansive” melody, was commissioned by the Los Angeles Philharmonic Orchestra at the behest of Esa-Pekka Salonen, and premiered in February 1993 with the composer himself conducting.

Witold Lutosławski, a deeply modest individual, has been decorated with dozens of prestigious awards, including the first Grawemeyer Prize, a Gold Medal from the Royal Philharmonic Society, the Queen Sofia Prize from the Ferrer-Salat Foundation (Spain), and, in 1993, the Polar Music Prize and the Inamori Prize from the Kyoto Foundation.