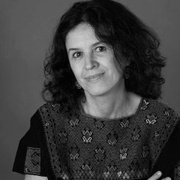 Born in Mexico City, Hilda Paredes has lived in London since 1979. Following studies at the Guildhall School of Music, she earned a Master of Arts from the University of London and a Doctorate from the University of Manchester. She also attended classes with Sir Peter Maxwell Davies and Richard Rodney Bennett at the Dartington Summer School.

In 1989, she participated in the Garden Venture Opera Project in Dartington, for which she wrote Agamemnon takes a bath. Subsequently, she composed her first chamber opera, The Seventh Seed (1991), which was recorded and released on the Mode Records label. Her second opera, El Palacio Imaginado (2003), commissioned by the Musik der Jahrhunderte Festival, the English National Opera, and the New Haven Festival of Arts and Ideas, was performed to great acclaim on both sides of the Atlantic.

Paredes has received numerous accolades, including grants from the Rockefeller Foundation for Culture (Mexico/USA) and the Guggenheim Foundation, the Ballet Prize from the Arts Council of Great Britain in 1988 for El Prestidigitador, and support from the Sistema Nacional de Creadores (FONCA) in Mexico.

A composer with a truly international reputation, Paredes’ works have been performed by ensembles such as London Sinfonietta, Ensemble Modern, Ensemble Recherche, and the Arditti Quartet, the latter of which has premiered a number of her pieces, including Can Silim Tun (1999; in collaboration with Neue Vocalsolisten), Papalote (2000; with Jake Arditti), and Canciones lunáticas (2008-2009). Her music is frequently programmed in prestigious festivals such as Huddersfield and Edinburgh in the United Kingdom, Eclat and Ultraschall in Germany, Musica and Octobre en Normandie in France, Wien Modern in Austria, Akiyoshidai and Takefu in Japan, Ars Musica in Brussels, Archipel and Music Monat in Switzerland, De Ijsbreker Chamber Music Festival in Amsterdam, Warsaw Autumn, Ultima in Oslo, Melbourne Festival, and other festivals in the United States, Spain, and Mexico.

Hilda Paredes teaches composition and lectures at the University of Manchester. She has also presented guest lectures at North American universities such as UCSD, Buffalo, and Mills College (where she served as “Darius Milhaud Visiting Professor” in 2007), at Centre Acanthes in France, and at the Escola Superior de Música de Catalunya in Barcelona, where she was invited to teach in 2011. Additionally, she is active in the new music scene in her country of birth, notably teaching at institutions including the University of Mexico and collaborating with Mexican National Radio.

Notable works in Paredes’ catalogue include Fragmentos de Altazor for six voices, commissioned by the Neue Vocalsolisten and premiered in Stuttgart in December 2010; Revelación (2011) for ensemble and real-time electronics with choreography by Ana Luján, commissioned by Integra - Fusing music and technology and Grup Instrumental (Valencia); and Altazor, commissioned by the Festival D’Automne for Guillermo Anzorena, Ensemble L’Instant Donné, with electronics produced at IRCAM, premiered in November, 2011. In 2017, she was commissioned by the University of New Mexico to compose several pieces for children based on the popular songs included in the JD Robb archive; this gave rise to the works Los animales, El burrito pardo, Arre, arre mi burrito, and Don Gato, among others. In 2018, her chamber opera Harriet, based on the life of American abolitionist and political activist Harriet Tubman, was premiered at the Muziekgebouw in Amsterdam.