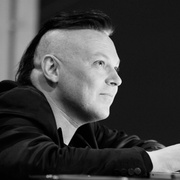 Outside of the boundaries of contemporary or non-academic music, Kasper T. Toeplitz composes and performs electronic music using noise. He started out in music playing “classic” electric bass repertoire, i.e., rock and punk music, and soon thereafter composed his first works, which were heavily influenced by the music of Scelsi, Ligeti and Penderecki, and later by that of Nono, Stockhausen and Xenakis. Among his early pieces are chambre and vocal works, an opera (J’irai vers le nord, j’irai vers la nuit polaire, awarded the Opéra Autrement/Acanthes au Festival d’Avignon Prize in 1989) and a symphony (Lhow, winner of the Besançon International Composition Competition in 1990). Numerous accolades followed, including a Leonardo de Vinci Grant in 1992 (which allowed him to travel to San Francisco) and the Villa Médicis Extra Muros Prize in New York in 1993. He has received numerous commissions from the French Ministry for Culture, notably for Ephémérides, NoiseVilleandSiyahi (1995 and 1996), was the recipient of a composition grant from the Montpellier Opera (1996-1997), and is a former resident of Villa Kujoyama (Japan).

In the late 1990s, feeling constrained by institutional paradigms of composition, Toeplitz’s aesthetic underwent a radical shift; he re-invented himself in the early years of the 21st century, developing a new approach to composing based upon the organisation—and the intonation—of noise. Starting in 1998, his music featured electronics more and more frequently. He undertook research in studios including GMEM, GRM, IRCAM and Art Zoyd. He founded Sleaze Art, an orchestra of electric guitars and basses in which computers play a significant role, both in the act of composing and as instruments in their own right. He premiered a number of his own works for bass guitar “transformed into a bass computer” (a prototype of the electronic bass he would later develop), including Demonology #11 and Lärmesmitte (2006).

In 2007, he founded the computer ensemble KERNEL, both as a vehicle for the performance of his large-scale works of sonic art and with the objective of undertaking research into questions of writing and performing in such a way.