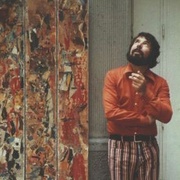 François Dufrêne was born in France in 1930. Encouraged from early on by his father - the artistic director of the Bernheim Gallery – he was the first artist to make use of the tape recorder, in 1953, before other pioneering sound poets such as Bernard Heidsieck, Henri Chopin, and Brion Gysin.

In 1946, he became Isidore Isou’s second disciple, after Gabriel Pomerand. Described by Alain Jouffroy as the “Schwitters of the nouvelle avant-garde,” Dufrêne developed a resolutely vocal body of poetic work, composing phonetic and phonatory poetry in the Lettrist style and evolving a style he called Ultra-Lettrist, which he performed in pieces such as “Cri-Rythmes” or “A Mots”: his Tombeau de Pierre Larousse and pieces that followed, such as Cantate des Mots camés, or Comptinuum all played with sound and noise, sense and nonsense. In parallel, he worked as a graphic artist in the “New Realist” movement and more specifically as a poster artist in the French Affichiste movement - dessous d’affiches, de stencils (beneath posters, stencils)… Many times, he underlined the “obvious relationship” betwen his “work at the level of sound, as a poet-musician,” and his “work as a false painter.”

From 1947 to 1953 he was active in the Lettrist movement, participating notably in the Tabou and Rose rouge recitals in 1950 – also the year he met Yves Klein and performed his own work for the first time.

On 4 May 1952, at the fringe of the Cannes Film Festival, he staged an “imaginary movie with no screen or film,” titled Tambours du jugement premier, which was performed again on 23 June 1973 for the Atelier de Création Radiophonique broadcast on France Culture. In 1952, he also founded the journal Soulèvement de la jeunesse with Marc’O, which shared a title with and explored the content of Isidor Isou’s eponymous manifesto (1950).

Around the same time, however (1953), he broke with the Lettrist movement and its orthodoxies; he opposed Isou’s dedication to typographism with the “criation de transes intranscriptibles“ (the “cry-ation of untranscribable trances) - his “cri-rhythms,” which initially were conceived in terms of their “fundamental spontaneity” but nevertheless required a “mechanical copy” - that is, a tape recording of the improvised sequence. He gave his first performance of cri-rhythms in 1955. At this point he had already begun work on the Tombeau de Pierre Larousse, was forming a friendship with Raymond Hains and Jacques Villeglé, and had started work as a visual artist. In 1959, he hosted a show/manifesto of his, Hains, and Villeglé’s work, titled “Le Lacéré Anonyme.”

In 1960 he helped to found the New Realists, and organized an evening at the Galerie des Quatre Saisons titled “Anthologie des poésies phonétiques“ that, according to Iliazd’s Poésie de mots inconnus (1949), relaunched the debate over the question Isou had claimed to conclusively answer of whether Lettrism (and Isou himself) were first in this field. Dufrêne’s first solo show, in 1963, titled “Les Archi-made,” was followed in 1964 by “Mot Nu Mental,” both at Galerie J. His seventh show, in 1980-1981, titled “Affiches lacérées” (at the Centre Noroit, Arras), he shared with Villeglé, and featured a sound performance by Heidsieck, Chopin, and himself. His ninth and final show, in 1981, titled “Archimade et Ouestampage ou le back-slang” was held at the Centre d’Art Contemporain in Rouen.

In 1962-1963, “Domaine Poétique” soirées held in Paris, Stockholm, and London marked the beginning of Dufrêne’s stage collaboration with Heidsieck. In 1963-1964, Lettrist recitals (“à titre rétrospectif“) were held in Paris at the Théâtre National Populaire and the Odéon. In 1965, Dufrêne brought out two major sound publications; the crirythme Poésie physique, with Jean-Louis Brau and Gil Joseph Wolman – his two co-dissidents in his split from the Lettrist movement – and three others in n°23-24 (the 2nd with recordings) of Chopin’s periodical OU, which was the site for the creation and revelation of the “sonore” in the company of Heidsieck, Mimmo Rotella, Brion Gysin, and Chopin himself – not one of whom had any roots in Lettrism…

In 1968, Dufrêne participated in the 1st Text-Sound Compositions Festival in Stockholm. In 1970, for the 10th Anniversary of the New Realist Movement, he launched Recitativo all’italiana on the Piazza del Duomo in Milan, which parodied the style of Mussolini, as an introduction to Tinguely’s self-destroying sculpture “Victory.” In 1976, Heidsieck devoted an evening to Dufrêne in a series of events titled “Panorama de la Poésie Sonore Internationale” (An Overview of International Sound Poetry). In 1977, Cantate des Mots camés was held at the Centre Pompidou, which also brought out a cassette version of the event. In 1979, his work was included in the Concerts Manifestes series organized by Pierre Mariétan on the occasion of the publication of Chopin’s Poésie sonore internationale. From 1979-1982 he was featured in the first Polyphonix Festival and in 1980, he participated in the “Rencontres internationales de Poésie sonore” organized by Heidsieck and Michèle Métail.