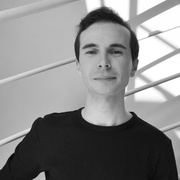 A trained cellist, Adrien Trybucki was devoted to music from an early age. At 13, his first work for orchestra was premiered by the Toulouse Conservatory (CRR) Orchestra. He went on to study at this institution from 2004 to 2014, and then at the Lyon Conservatory (CNSMDL) with Philippe Hurel and Martin Matalon, where he developped an interest in mixed music. His fifteen years of conservatory studies covered instrumental, vocal, and electro-acoustic composition, music theory, and analysis, as well as conducting and music history. He undertook the IRCAM Cursus (IRCAM’s composition and computer music course) in 2018-2019, during which he was a resident at the Cité des arts in Paris.

Adrien Trybucki is particularly interested in early and extra-European music. He regularly performs South American and Mediterranean traditional music, the influence of which may be observed in his own compositions, e.g., Après Achéloos (2015), which makes reference to Greek mythology. His catalogue includes acoustic, mixed, and electro-acoustic works, with an emphasis on chamber music, a format with which the composer is intimately familiar on account of his activities as a cellist.

He has received commissions from IRCAM-Centre Pompidou, Radio France, Grame, Musique Nouvelle en Liberté, the Hamburg Hochschule für Musik und Theater, and the Italian Pavillion at the Milan Exposition in 2015, among others.

His works have notably been performed by the Île-de-France National Orchestra, Ensemble Intercontemporain, Court-circuit, Talea, Itinéraire, Divertimento, Switch, Taller Sonoro, Zellig, Musicatreize, Atelier XX-21, Maîtrise de Toulouse, Diotima Quartet, and by soloists from the Toulouse Capitole National Orchestra. His music has been performed in France, Switzerland, Germany, USA, Italy, United Kingdom, South Korea, Finland, China, Netherlands, Spain, and Belgium, and broadcast on national radio stations including Radio France and the BBC. His works have been featured in festivals including Manifeste, Archipel, Présences, the Lucerne and Cheltenham Festivals, the Lyon Biennale of Exploratory Music, and the Bypass Forum in Toulouse.

His scores are published by BabelScores.