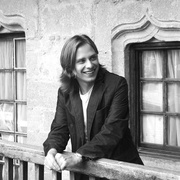 Stanislav Makovsky was born in 1988 in Siberia. Following studies of cello and musicology at Kemerovo Music College, he undertook study of composition with Youri Kasparov at the Moscow Conservatory. He went on to study composition with Stefano Gervasoni, electronic music with Luis Naòn, Yan Maresz and Tom Mays, and improvisation with Aleksandros Markeas and Vincent Lê Quang at the Paris Conservatory (CNSMDP). He participated in masterclasses and music academies including Tchaikovsky-City (2011), Darmstadt (2012), Royaumont Voix Nouvelles (2014), and ManiFeste (2016-17). From 2014 to 2017, he was in residence at the Robert Laurent-Vibert Foundation at the Château de Lourmarin (in southeast France).

Strongly influenced by extra-musical elements such as Kantian philosophy and various historical mythologies, Stanislav Makovsky has developed an aesthetic which follows on from the electroacoustic/electroacoustically-inspired styles established by Georges Aperghis, Raphaël Cendo, Chaya Czernowin, and Stefano Gervasoni. Along with Chia Hui Chen, with whom he undertook a significant part of his musical education, Makovsky is at the forefront of a new generation of electroacoustic composers. He has worked with dance on a number of occasions, using electronics to generate sound in real time or to broadcast fixed media.

Déjà la nuit tombait (fragments de l’Iliade), a work composed in collaboration with Chia Hui Chen for a theatre play by Daniel Jeanneteau, was premiered in 2018 at the Gennevilliers Theatre as part of ManiFeste.