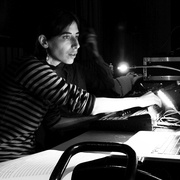 Núria Giménez-Comas was born in Spain in 1980, where she studied piano and mathematics before enrolling in the ESMUC (Escola Superior de Musica de Catalunya, Barcelona) in 2006. She worked with Christophe Havel, who from the beginning pushed her to explore pure electroacoustics and the importance of work with timbre, both in the expansion of timbre and harmony, the cohesiveness of timbre and harmony, and in interactions between computers and instrumentalists. During this period, she also took composition courses with Helmut Lachenmann, Michaël Levinas, and Klaus Huber.

From 2010 to 2012, she pursued a masters at the Geneva University of Music with Michael Jarrell, Luis Naón, and Eric Daubresse. For her masters thesis, she explored research into sound perception and the concepts of sound image and masking. Her interest in images and interdisciplinarity led her to participate in the In Vivo-Video course of the Académie ManiFeste. From 2012 to 2014, she participated in Cursus, IRCAM’s composition and computer music course. There, her projects focused on synthesis through physical models and soundscapes with the Ambisonics 3D spatialization system. In 2017 and 2018, she participated in IRCAM’s artistic research residency program with ZKM, a collaborative research project conducted in cooperation with Marlon Schumacher that explored and developed the idea of 3D spatial sculpting that included work on synthesizing textures.

Giménez-Comas has participated in the Académie de Villecroze, the Akademie Schloss Solitude, the Tactus Forum in Brussels, and Voix Nouvelles (Royaumont).

Her compositions have been performed by artists including the Diotima Quartet, the Geneva Chamber Orchestra, the Ensemble Contrechamps, the clarinettist Harry Sparnaay, the Klangforum Wien trio, and the Brussels Philharmonic. In 2012, she founded Ensemble Matka in Geneva.

She is currently working on a musical fiction, commissioned by Ircam, taken from Nostalgie 2175 by Anja Hilling, with the director Anne Montfort. At the same time, she is collaborating with the latter on a mini-opera project on the text Shadow. Eurydice says by Elfriede Jelinek, commissioned by the Grand Théâtre du Liceu in Barcelona.