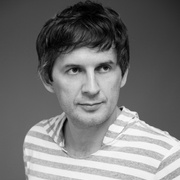 Following studies of Law, Marcin Stańczyk dedicated himself to composition, studying at the Łódź Academy of Music with Zygmunt Krauze (music theory and composition) and Krzysztof Knittel (electronic music).

In 2007, he was selected to participate in a four-year programme inaugurated by Krzysztof Penderecki. From 2007 to 2010, he undertook further study of composition with Ivan Fedele at the Accademia Nazionale di Santa Cecilia in Rome. During this time, he attended the Young Composers Meeting in Apeldoorn, a masterclass with Klangforum Wien and Trilok Gurtu at the Venise Biennale (2007-2008), the Bang on a Can Summer Festival (2009), and Voix nouvelles at Royaumont (2009).

From 2007 to 2011, he was awarded numerous study grants from Poland, as well as from the Internationales Musikinstitut Darmstadt, the Italian government, and the Aldeburgh Music Centre.

In 2011-12, he participated in the first year of the IRCAM Cursus (IRCAM’s composition and computer music course), completing the second year in 2013-14.

In 2013, he received a Doctorate in Music from the Łódź Academy of Music.