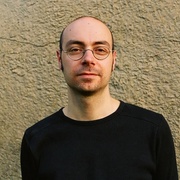 Stéphane Borrel was born in France in 1974. He began his studies in the sciences, then entered the Conservatoire national de région de Lyon in 1995. Between 1995 and 2001, he earned certificates in harmony, counterpoint, analysis, music history, and aesthetics. While there, he also studied instrumental and electroacoustic composition. In 2001, he began practical and theoretical training at the Conservatoire national supérieur de musique et de danse de Lyon in composition, electroacoustics, and computer music. He began studying musical analysis in 2005 and orchestration and ethnomusicology in 2006. In 2001, he also earned a degree in musicology from the Université Lumière Lyon II. He currently teaches there, as well as at the Conservatoire à rayonnement régional de Lyon.

Borrel writes for a wide variety of ensembles, from chamber music to symphony orchestras, both mixed and electroacoustic pieces. His work has been presented at the SIMC forum for young composers in Paris at the Journées GRAME and at the Musiques en Scène Biennale in Lyon, as well as at festivals including Transit in Louvain, Why Note in Dijon, Musica in Strasbourg, the Rencontres contemporaines de Lyon, Extension du domaine de la note in Paris, Musiques inventives d’Annecy, as part of the performance season of the Rondó in Milan, and at the Chantiers de la création at the Auditorium National in Lyon. His work has been performed by ensembles such as Ensemble Orchestral en Languedoc EOLiennes, L’Instant Donné, Ensemble Orchestral Contemporain, Ensemble ACTEM, the Orchestre national de Lyon (which commissioned Tapage for fifty children and five musicians (2009-2010)), Ictus, Les Percussions de Treffort (La traversée de la Manche, 2009), Pléïade, Atelier XX-21, the Divertimento Ensemble, the Morpheus trio, and the Trio de Poche (Tombeau de Bartók, 2011).

He was a composer-in-residence at the GRAME studios in 2007, with Muse en Circuit in 2007-2008, with MIA (Musiques Inventives d’Annecy) in 2008 and with the GMVL (Groupe musiques vivantes de Lyon) in 2010-2011. He also won the Bourse Phonurgia Nova fellowship in 2009. He works with the free improvisation group Le Détrapi, four musicians from Jacques Di Donato’s improvisation group at the Conservatoire national supérieur de musique et danse de Lyon. Since 2008 he has been working on an opera, Pantagruel, and since 2010 on a project titled Anthologie du rire.