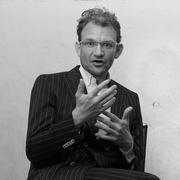 Swiss composer and organist born in 1978 in Rapperswil.

As an organist, Michael Pelzel has been invited to perform in cathedrals in Sydney, San Francisco, Los Angeles, and Cape Town.