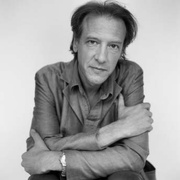 Composer and visual artist born in California in 1955.

Born in 1955 in San Rafael, California, Christian Marclay is a composer, performer, and visual artist. From 1975 to 1977, he studied at the Geneva University of Visual Art, going on to study sculpture at the Massachusetts College of Art. In 1978, he participated in an exchange program with Cooper Union in New York. He graduated with a Bachelor of Arts in 1980.

Long associated with John Zorn, Elliott Sharp, Butch Morris, and the Kronos Quartet, he is heavily influenced by the works of Joseph Beuys, John Cage, and the Fluxus movement.

Since the formation of his first group “The Bachelors, Even” (in tribute to Marcel Duchamp) in 1979, Christian Marclay has been influenced by contemporary art, and has emphasised the importance of questioning traditional artistic values. Early in his career, he set out to blur the lines between visual and sonic artforms, transforming sounds and music into physical, visible forms in his performance pieces, collages, sculptures, installations, photographs, and videos. He started using turntables in the early 1970s as a means to critique, in the tradition of rock and punk music, the commodification of records and the culture industry. In this vein, in his installation Footsteps (1989), he covered the floor of a gallery with thousands of records which contained recordings of footsteps - visitors were invited to walk over them, thereby scratching and transforming them as they moved around the space. In the “Body Mix” series (1991-92), he assembled album covers into a set of strange collages, evocative of the Exquisite Corpse game of the surrealists. Such transpositions of instruments or musical objects into the visual realm, often in a way which is intended to confuse or destabilise the viewer, are among the key elements of Marclay’s creative identity. Virtuoso (1999), for example, comprises an accordion whose bellow has been stretched out to more than seven meters. Video Quartet (2002), a video work projecting sequences from Hollywood movies onto four screens, evokes pop culture, the appropriation of art, and sampling.

He is active as a DJ, performing improvised music and mix sets using modified records in which he superimposes recordings of a range of genres into a dissonant collage of altered sounds. He has appeared on numerous recordings and performed at venues including the Knitting Factory and The Kitchen in New York. He has collaborated with bands, ensembles, and musicians, including Sonic Youth, Kronos Quartet, Otomo Yoshihide, Ikue Mori, John Zorn, and Arto Lindsay.