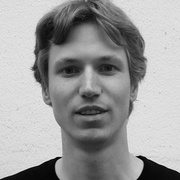 German composer and pianist born in Trostberg in 1983.

Martin Grütter was born in Germany in 1983. He studied composition with Dieter Acker at the Academy for Music and Theatre, Munich, from 1999 to 2001 before going on to study mathematics and history at the University of Regensberg. From 2004 to 2009, he continued his music studies at the Hanns Eisler School of Music in Berlin, studying composition with Hanspeter Kyburz and electronic music with Wolfgang Heiniger. He also participated in masterclasses with Brian Ferneyhough and Stefano Gervasoni.

Grütter’s catalogue includes pieces for solists, ensembles, vocalists, musical theater, and electronics, which have been performed in Berlin, Paris, Munich, Karlsruhe, and Salzburg. He also plays a great deal of improvisational music. In October 2011, his Tiefflug, a commission from the Ensemble Intercontemporain, premiered at the Pompidou Centre.