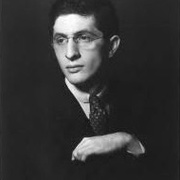 Bernard Herrmann was an American composer and conductor born in New York City in 1911. From 1929 to 1933, he attended DeWitt Clinton High School, the Juilliard School, and New York University, where he studied orchestra conducting with Albert Stoessel and composition with Bernard Wagenaar and Percy Grainger. It was with Grainger, who detected the young composer’s talent and his taste for seeking out unusual sounds and ambiences, that Herrmann began to blossom creatively. In 1933, Herrmann founded and conducted the New Chamber Orchestra, which performed mostly contemporary music, particularly British, for which Herrmann developed a marked taste at that time. In 1934 he became an assistant staff conductor at for the CBS orchestra, where he composed his first stage music for radio, and where he continued to work for some twenty years.

Herrmann spent much of the 1930s composing and directing for numerous CBS series, allowing him to refine both his own style and knowledge, particularly in the field of rapidly-written or rapidly-arranged scores, often in short sequences and for small formations; in addition to his work for the “Columbia Workshop” program series (75 scores) or “Suspense” (22 scores), Herrmann collaborated with Orson Welles, notably in the 1938 series “Mercury Theatre on the Air” (22 scores), which aired in a tamer form as the “Campbell Playhouse” series from 1938 to 1940 (56 scores). Herrmann also worked on numerous television series, including Suspicion (The Alfred Hitchcock Hour, 1962-1965), The Virginian, and twenty-three episodes of The Twilight Zone, for which he wrote remarkably inventive and unexpected scores.

In parallel to his intensive writing for radio and television, Herrmann continued to compose concert pieces, the first of which he wrote in 1929. There was a good deal of overflow between his own work and his compositions for broadcast and film, and several of his orchestral suites were drawn from pieces he wrote commercially. It should be recalled that he devoted the best of his talent to his personal work, in particular to his opera Wuthering Heights, which he worked on from 1943 to 1951, and which offers yet another example of his taste for dark, tormented subject matter.

His career as a film composer was brilliant from the start: the first score he wrote was for Welles’ Citizen Kane in 1941, produced by RKO Pictures. He composed the score for The Magnificent Ambersons the following year, but refused to be credited for the work after RKO Pictures edited the film heavily, removing more than half his score. This opened the door to collaborations with Hollywood’s greatest directors of the day, including Brahm, Curtiz, Hathaway, Ray, Dieterle, and Mankiewicz. He remains best known - indeed, almost to the detriment of his other successes - for his collaboration with Hitchcock from 1955 to 1966. During that time he wrote the scores of nine of Hitchcock’s films, including Vertigo, North by Northwest, and Psycho. Hitchcock brought their exceptional collaboration to an abrupt end when he rejected Herrmann’s score for Torn Curtain. The break was a blow to Herrmann. He continued to write film scores, but these lacked the singular continuity that characterized his collaborations with Hitchcock. In the final years of his career he worked with directors such as Truffaut, for whom he wrote the scores of Fahrenheit 451 and La Mariée était en noir - both difficult collaborations - and Brian De Palma, for whom he wrote the scores of Sisters and Obsession, as well a for Martin Scorsese. Herrmann died just after completing the score for Taxi Driver, and Scorsese dedicated the film to him “with respect and gratitude.”