No other version available

for orchestra and live electronic, 2017.

It is a piece for orchestra and electronic which is performed by a keyboard player who trigger each electronic musical events. Important, 2 trumpets (Tr. 3, Tr. 4), 2 horns (Cor. 3, Cor. 4) , 2 trombones (Tbn. 3, Tbn. 4) and 2 percussions (Batt. 4, Batt. 5) are spread in the venue arround the audience area (on balconies or stairs…) according to the conductor. 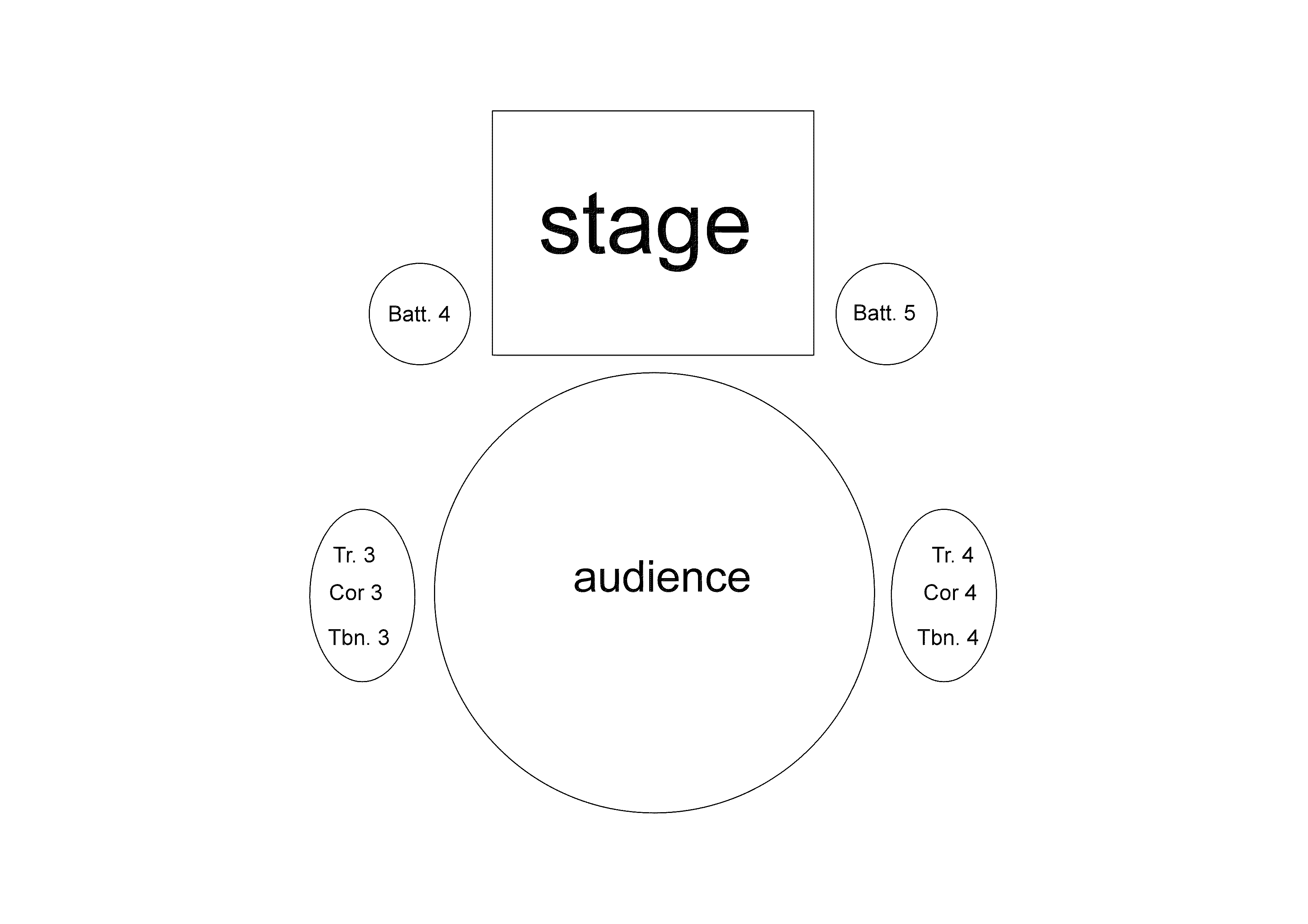 In the « foyer » of the concert hall, performed before and during the start of the entrance of the audience by 2 trumpets (Tr. 3, Tr. 4), 2 horns (Cor. 3, Cor. 4) , 2 trombones (Tbn. 3, Tbn. 4) and a tape (soundfile called « SonosphereIII&IV_Electro_Foyer_I_48K.wav » @48Hz, duration 13'36sec). A setup of a stereo PA is needed to perform the tape which is triggered by a technician (other than the sound engineer in the venue) on bar 108. The doors of the venue open during the tape part reaching the last minutes of its duration. The technical schedule has to be adapted according to the mood.

Note that the musicians have to reach the concert hall when they have finished.

If the time needed for the entrance of the audience lasts more than the soundfile (13'36sec) you can also play the second soundfile available and called « SonosphereIII&IV_Electro_Foyer_II_48K.wav » (@48Hz, duration 3'14sec).

In the concert hall, orchestra starts just before the doors open. The five first bars are repeated during the entrance of the audience. The light is soft on stage and on the public. Then, on his/her impression of the atmosphere or on the rise of the light, the conductor starts « A ».

The sound of the following instruments is transformed in real time during the performance :

A keyboard player (the instrument must be a master keyboard with midi out, 88 notes and piano keys) plays a chromatic phrase to trigger the electronic score. He/she must be as sharp as possible regarding the perfect timing and synchronisation simplicity.

The foyer can have a generous reverberation.

The concert hall, as often, can have a relative reverberation time but much less generous than the foyer.

One Macbook Pro retina as precised later with Max 7.3.3 installed.

One soundcard with 8 inputs and 8 outputs connected to a mixing desk (see sound rider for details).

As mentioned previously, the live electronic is triggered by a performer who plays an 88 keys master keyboard (midi out). He/she must be as sharp as possible regarding the simplicity of the score (chromatic phrases). 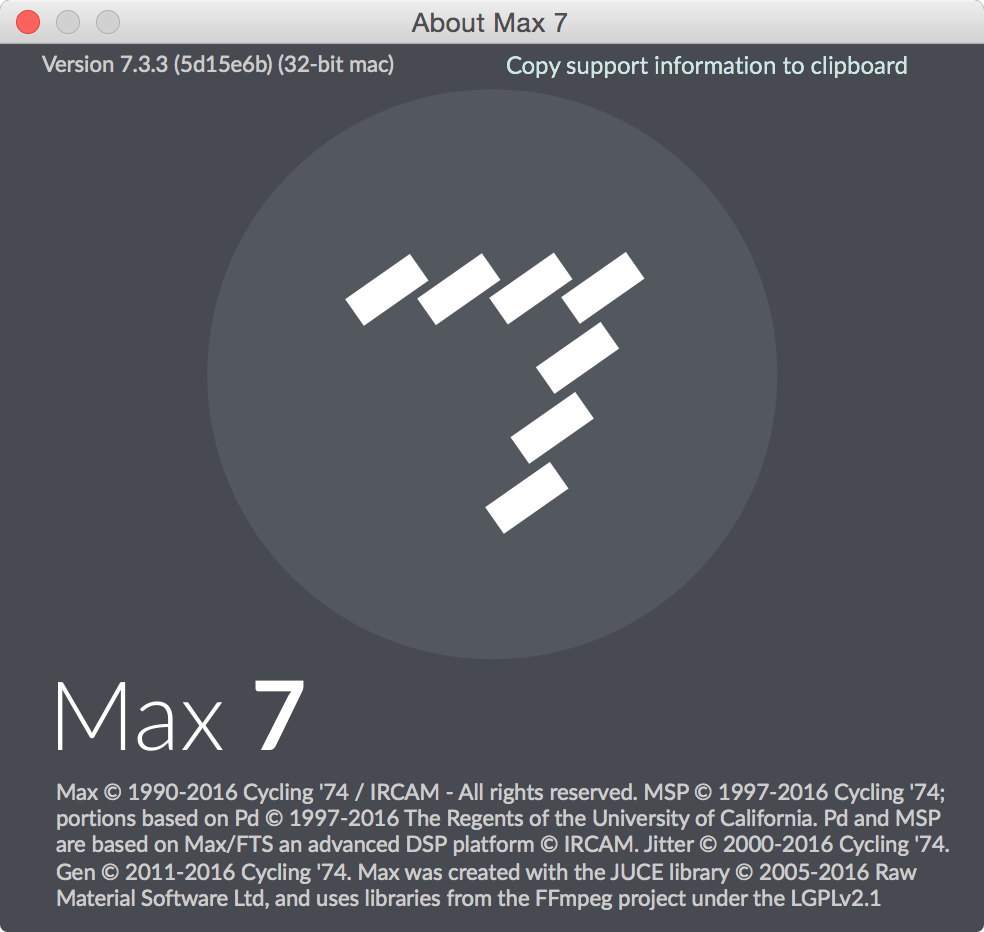 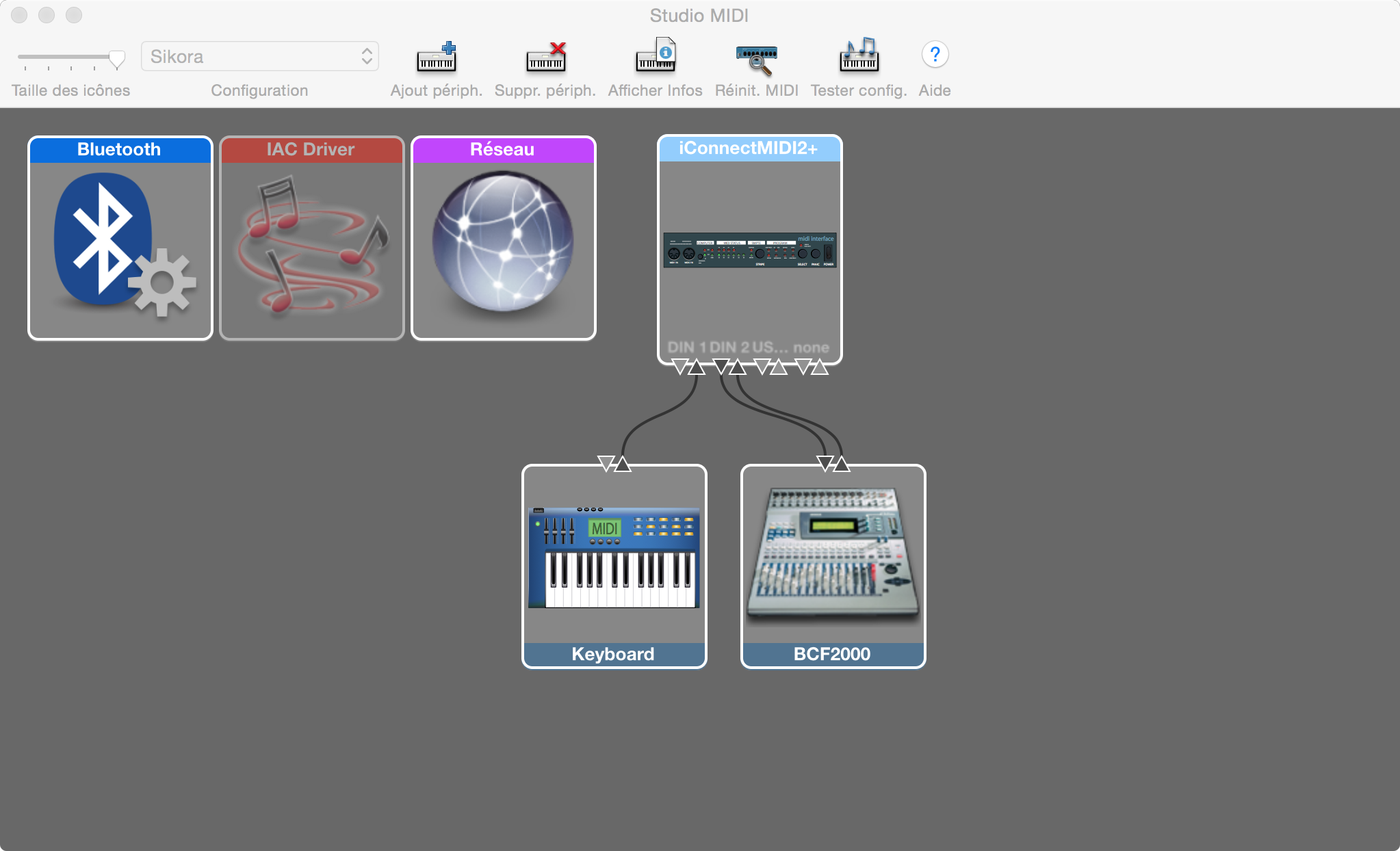 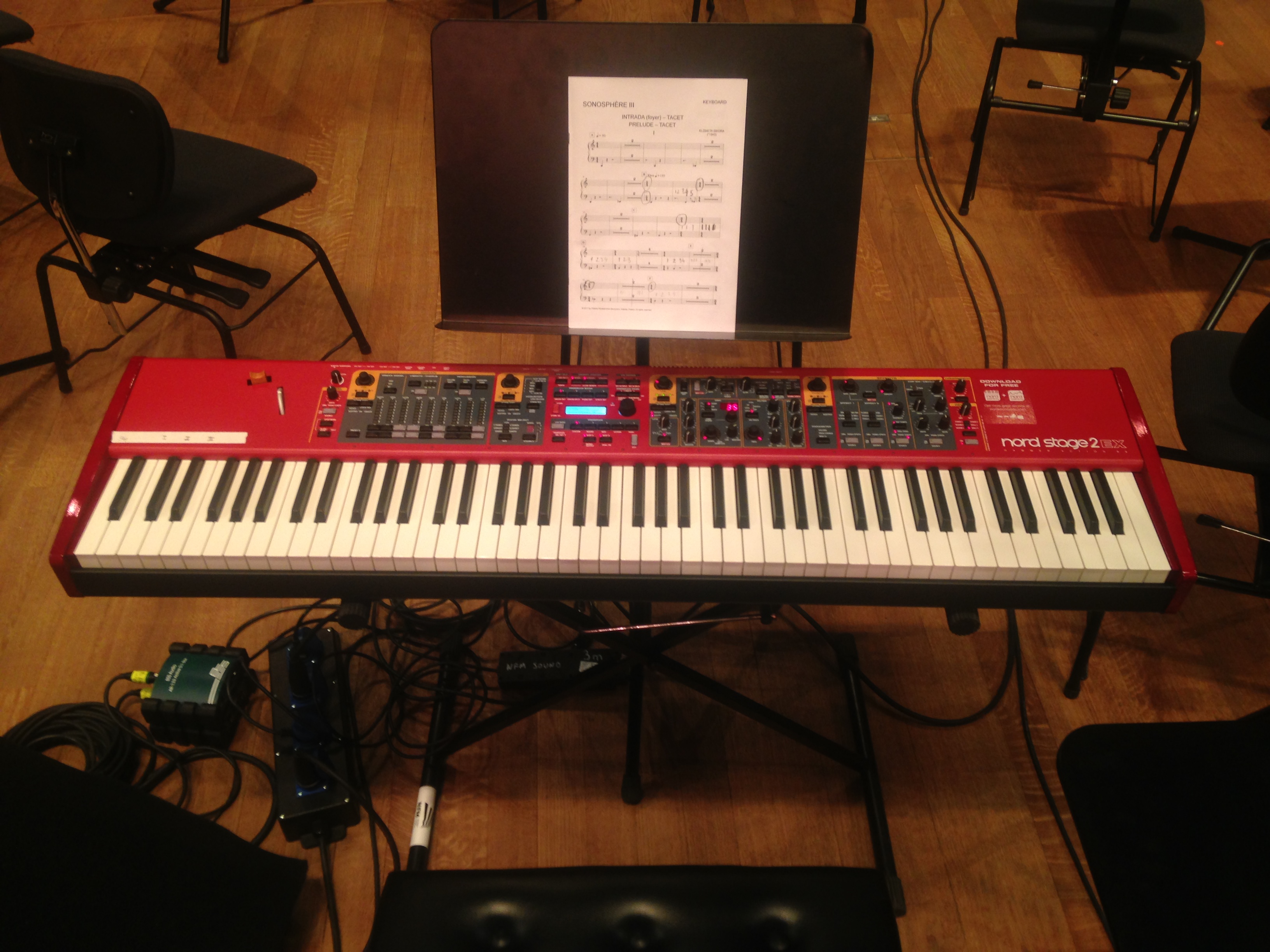 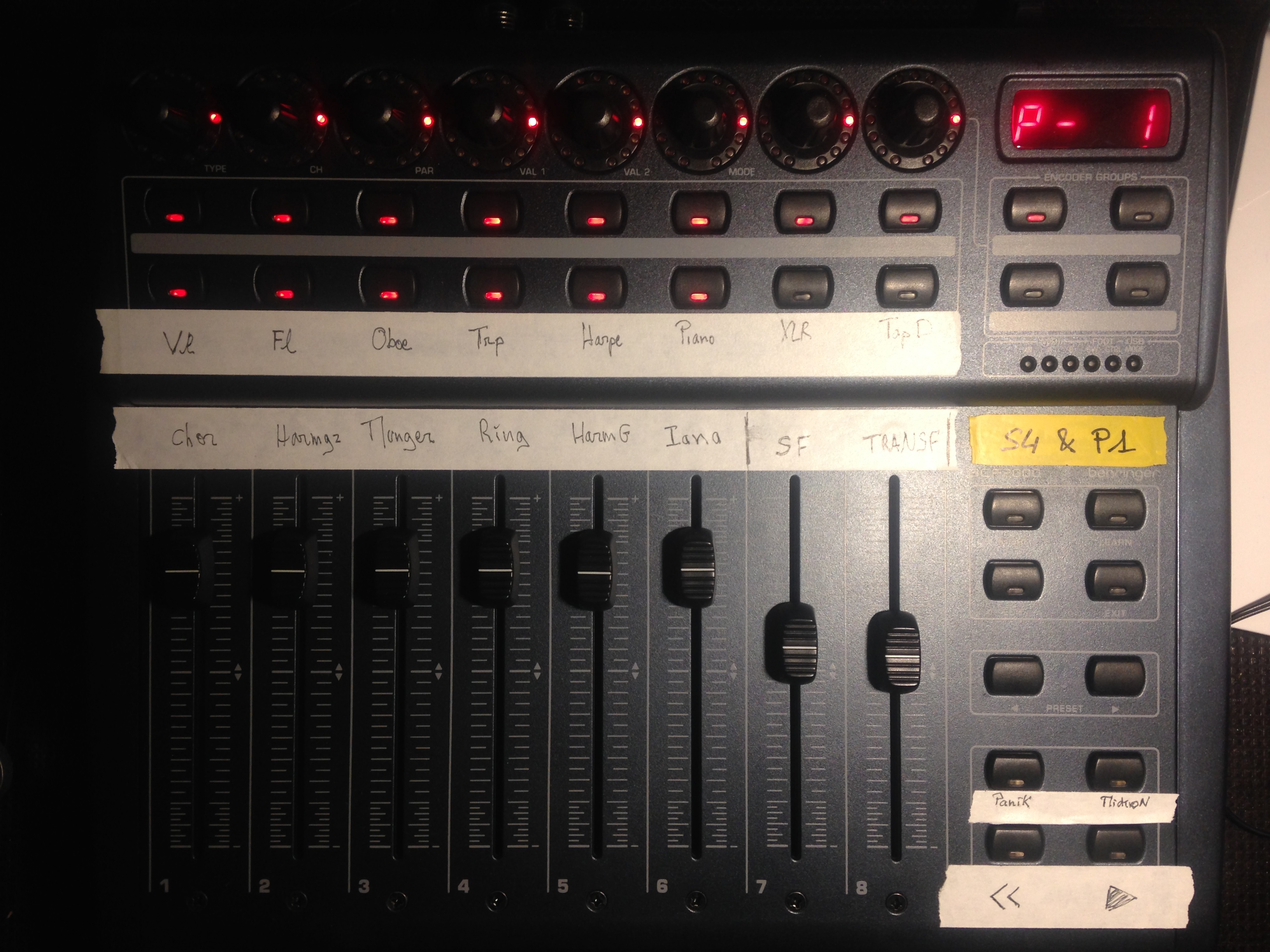 These keys are used for rehearsals. 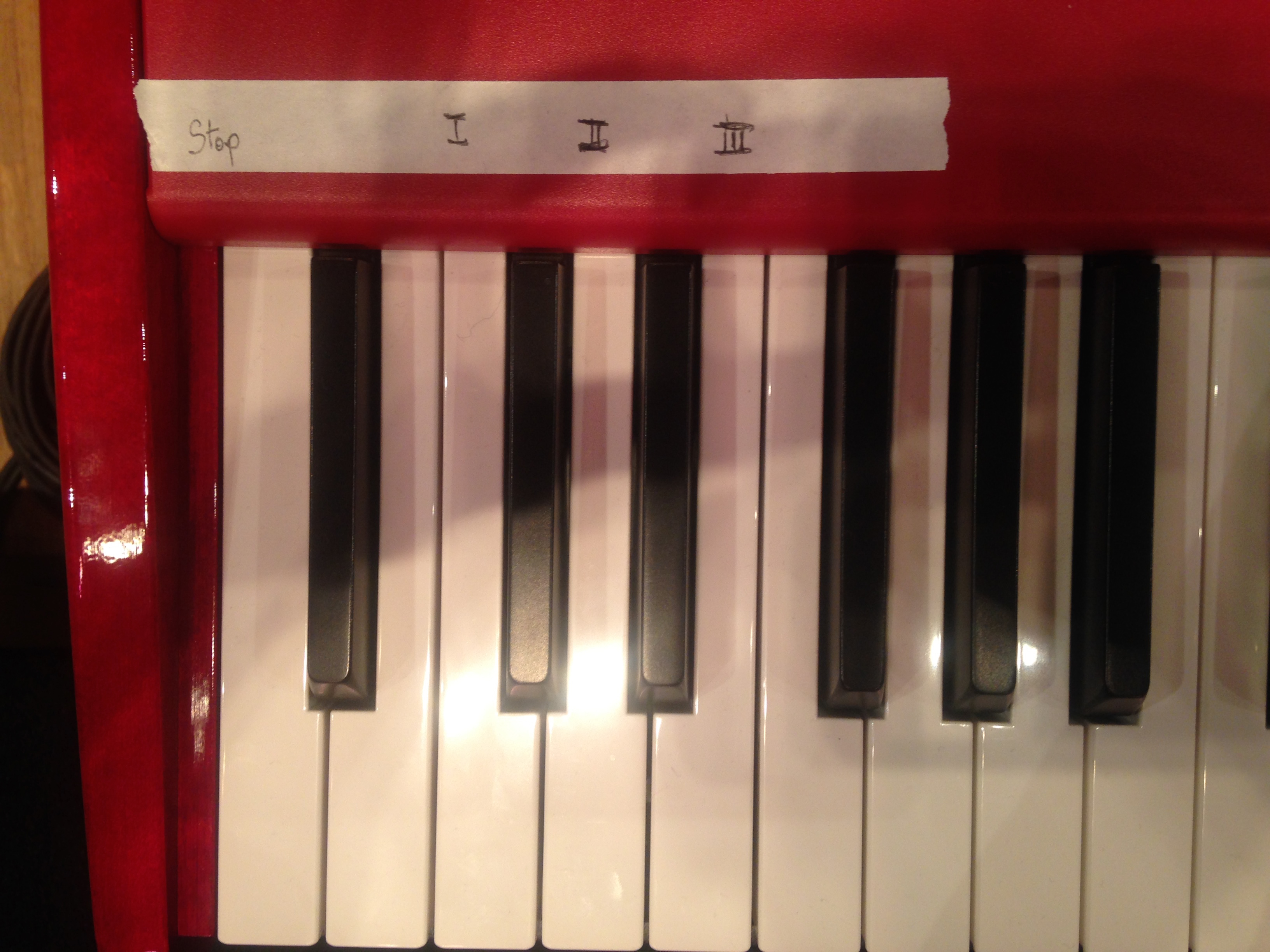 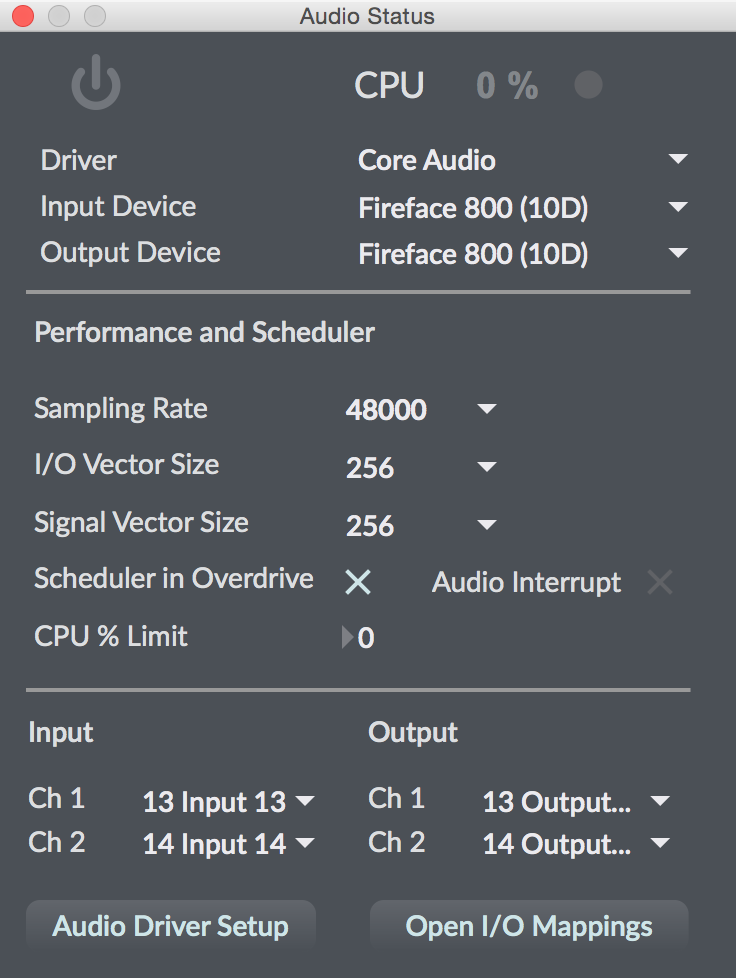 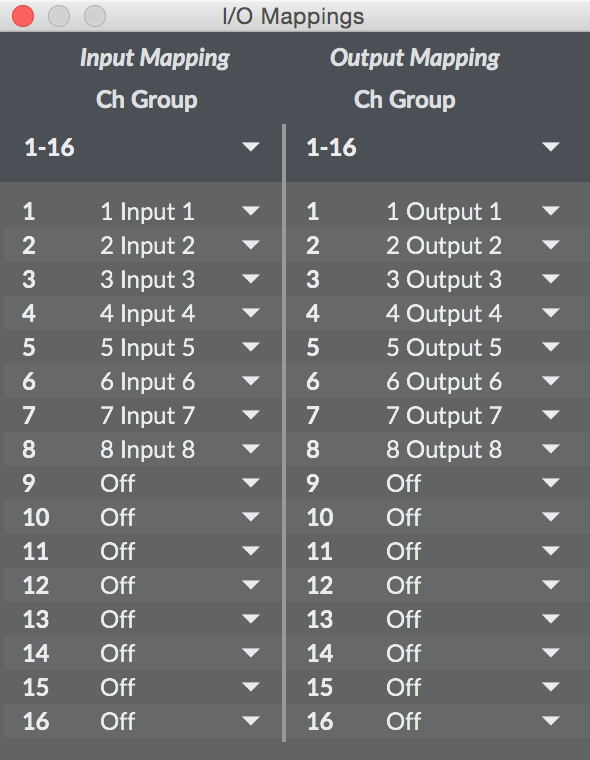 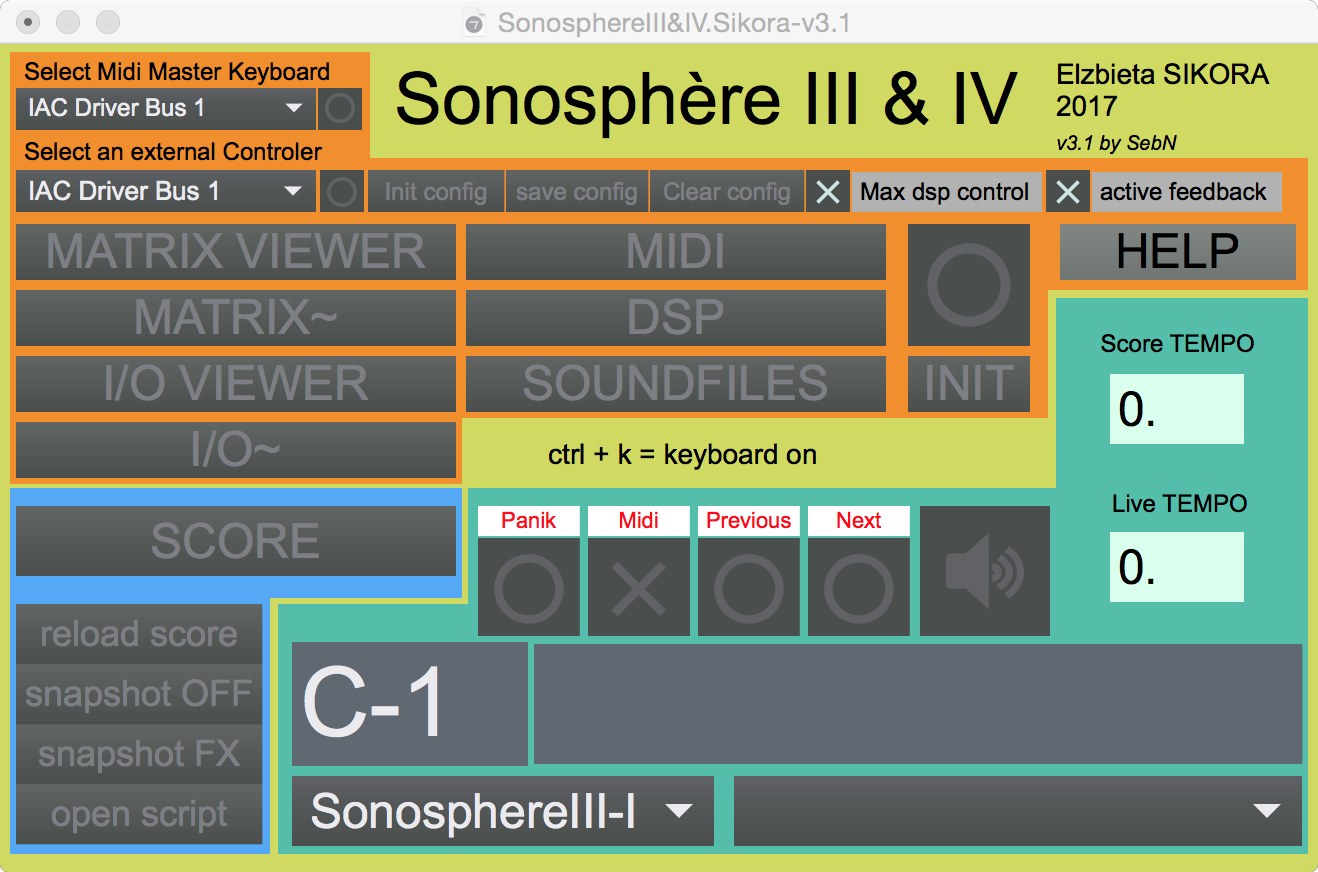 The extra application sn.player~.app is automatically lauched and communicate with the main patch through UDP (ports 32896 and 32897 are used). Just check that the app. is pointing on the same audio interface than max (step 1). All the soundfiles are loaded from the folder « soundfiles » included in the main folder. You can load the soundfile folder by clicking on « open soundfiles folder » if needed. 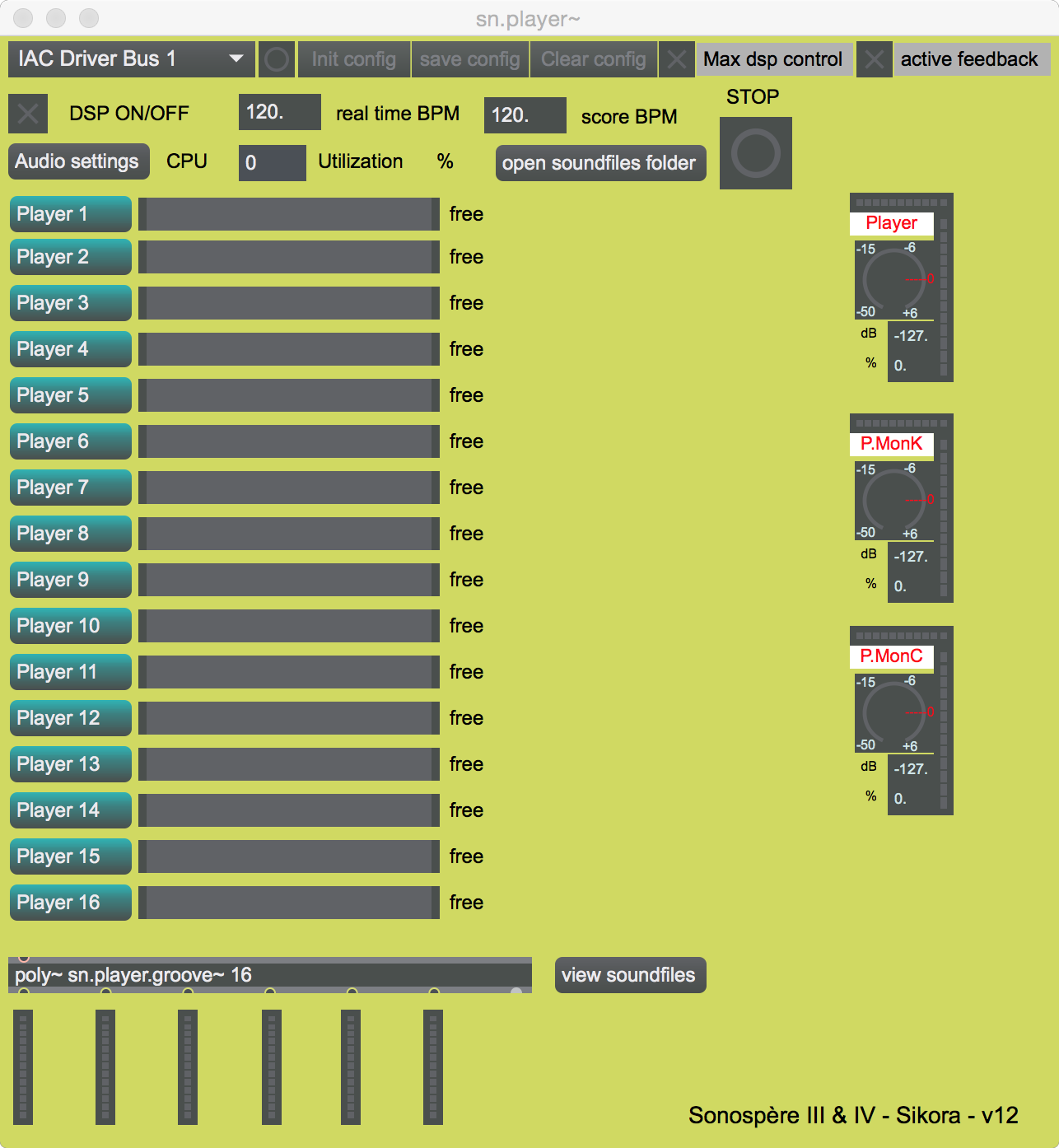 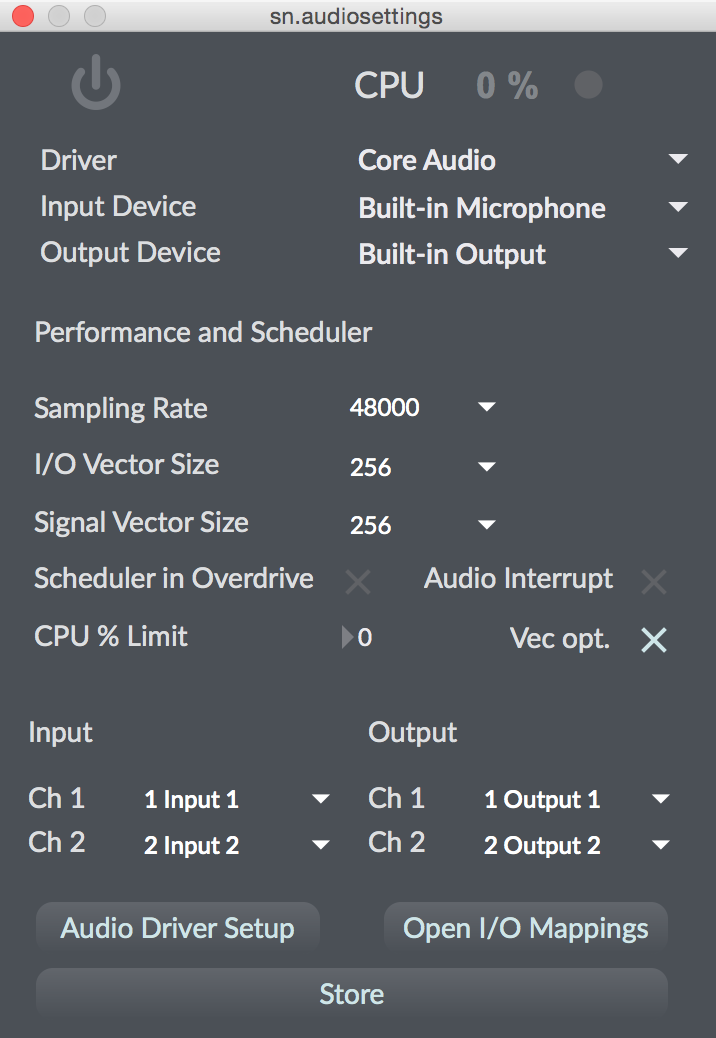 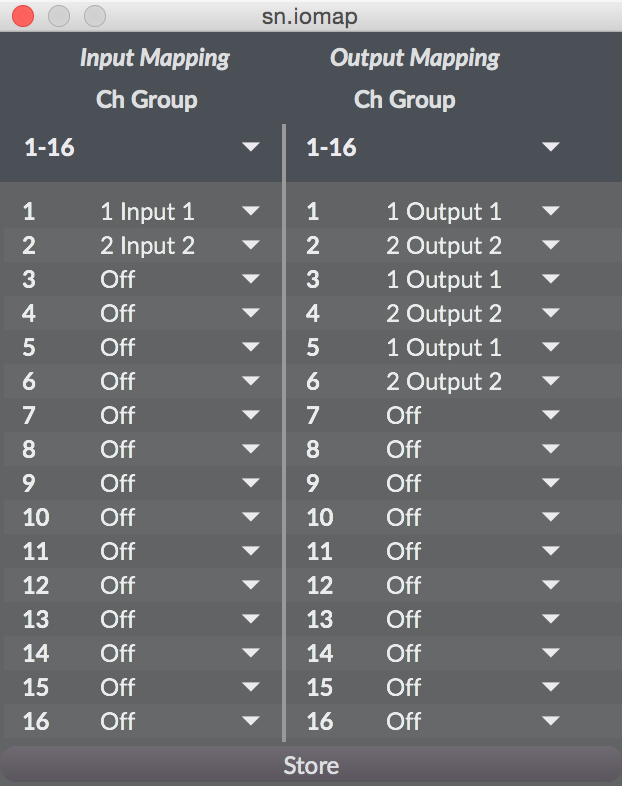 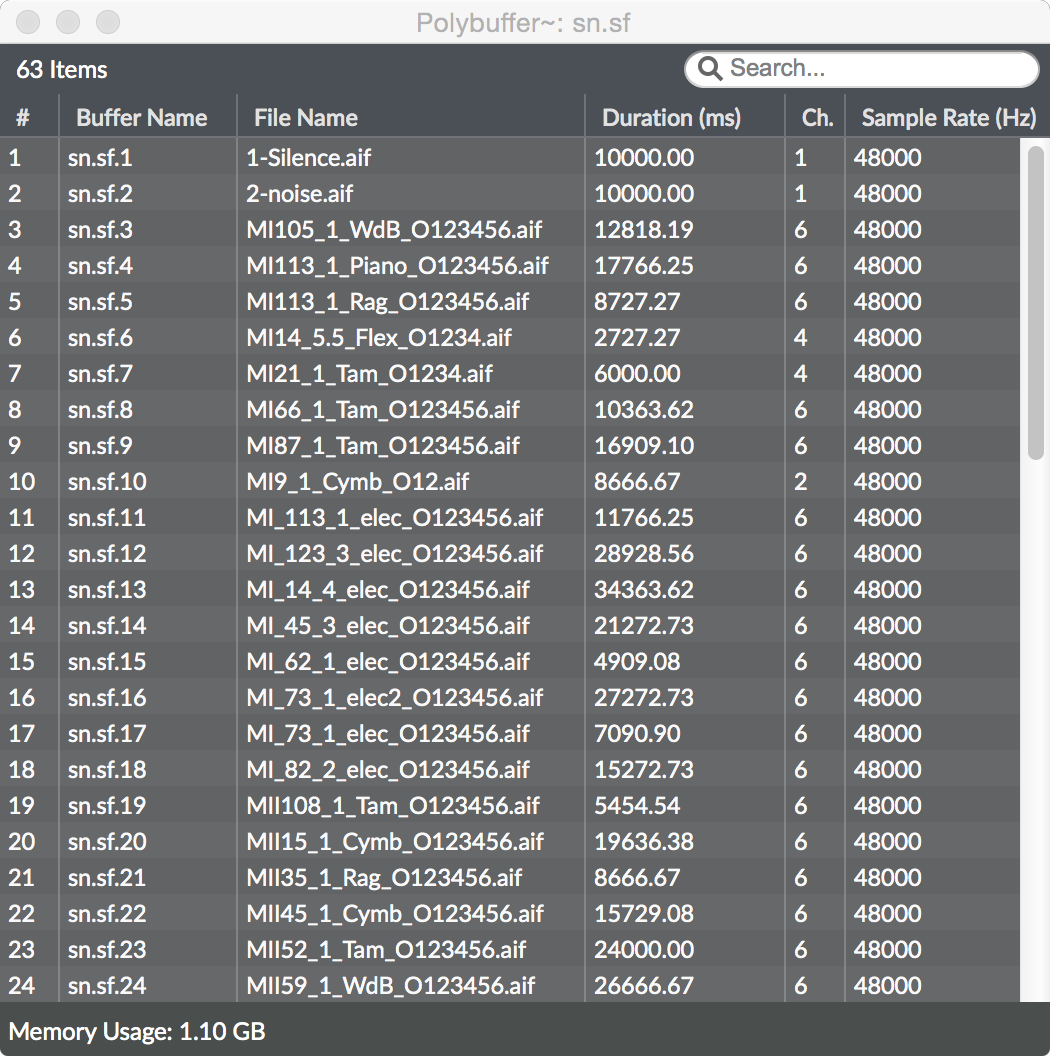 Back to the max patch main window :

1- select the external Midi Master Keyboard that you have previously declared in audio & midi configuration app. « Bang » to refresh the list.

2- select the external Midi fader controller that you have previously declared in audio & midi configuration app. « Bang » to refresh the list.

All the rotative level slider are assignable to an external controler like a BCF2000 from behringer. 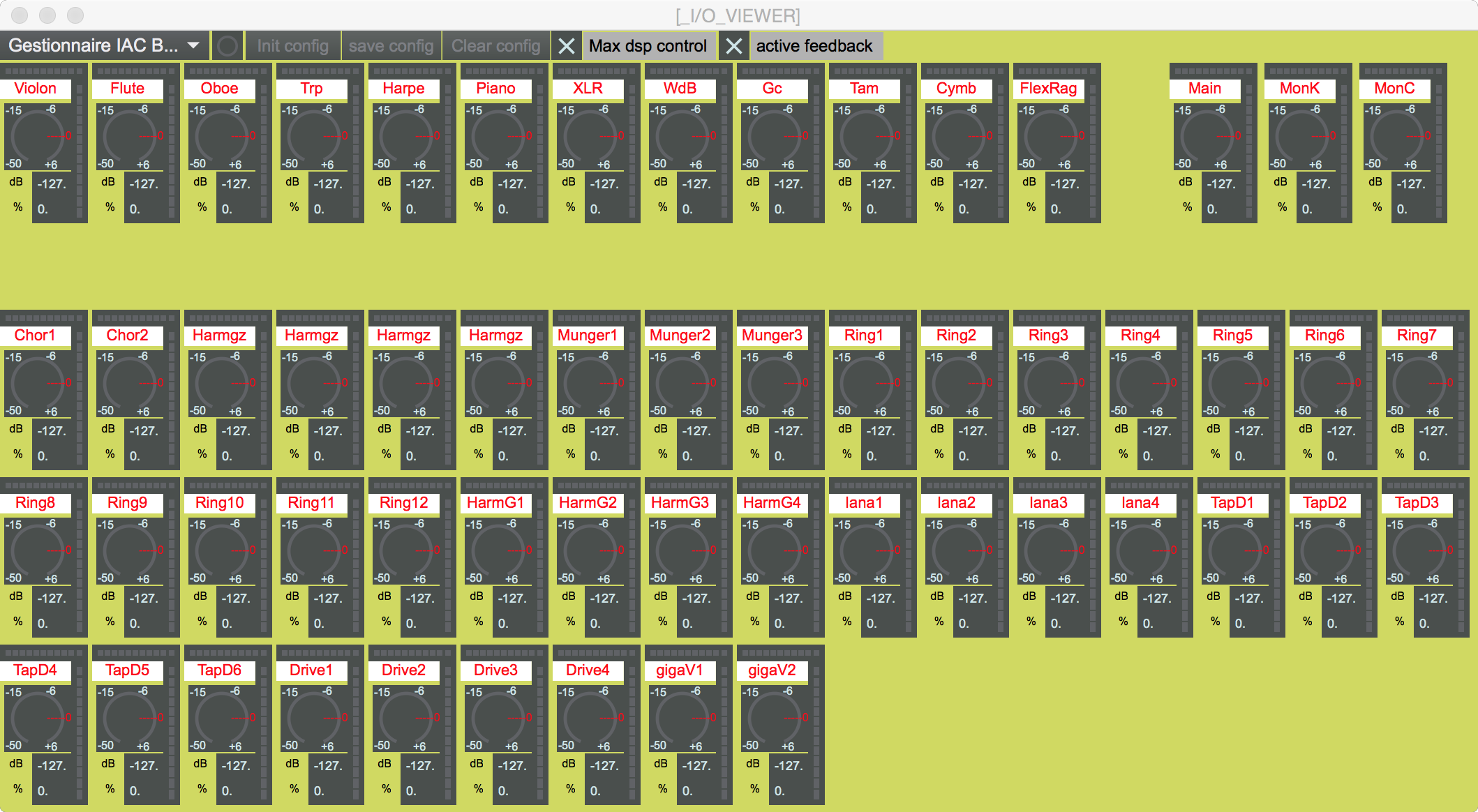 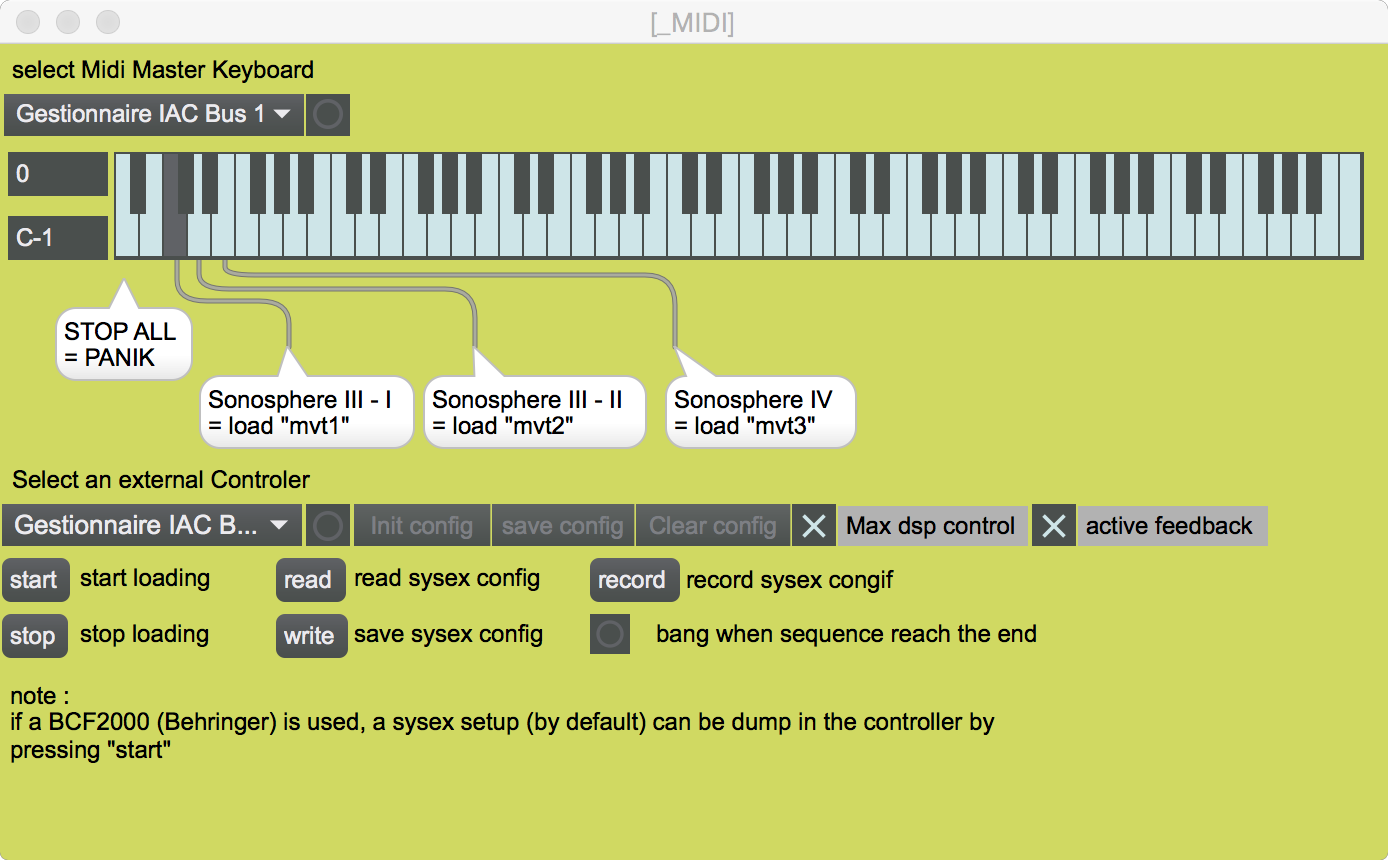 Midi Master Keyboard : you can select an external midi keyboard (like the Main window) and check that it is received. External Controler : you can select en external controler like a BCF2000 from behringer. By default you can configure a BCF2000 by pessing start (sysex dump) or your own by previously pressing read. If needed you can upload and record the setup of your own midi controler by pressing record and save it (by pressing write). Note : 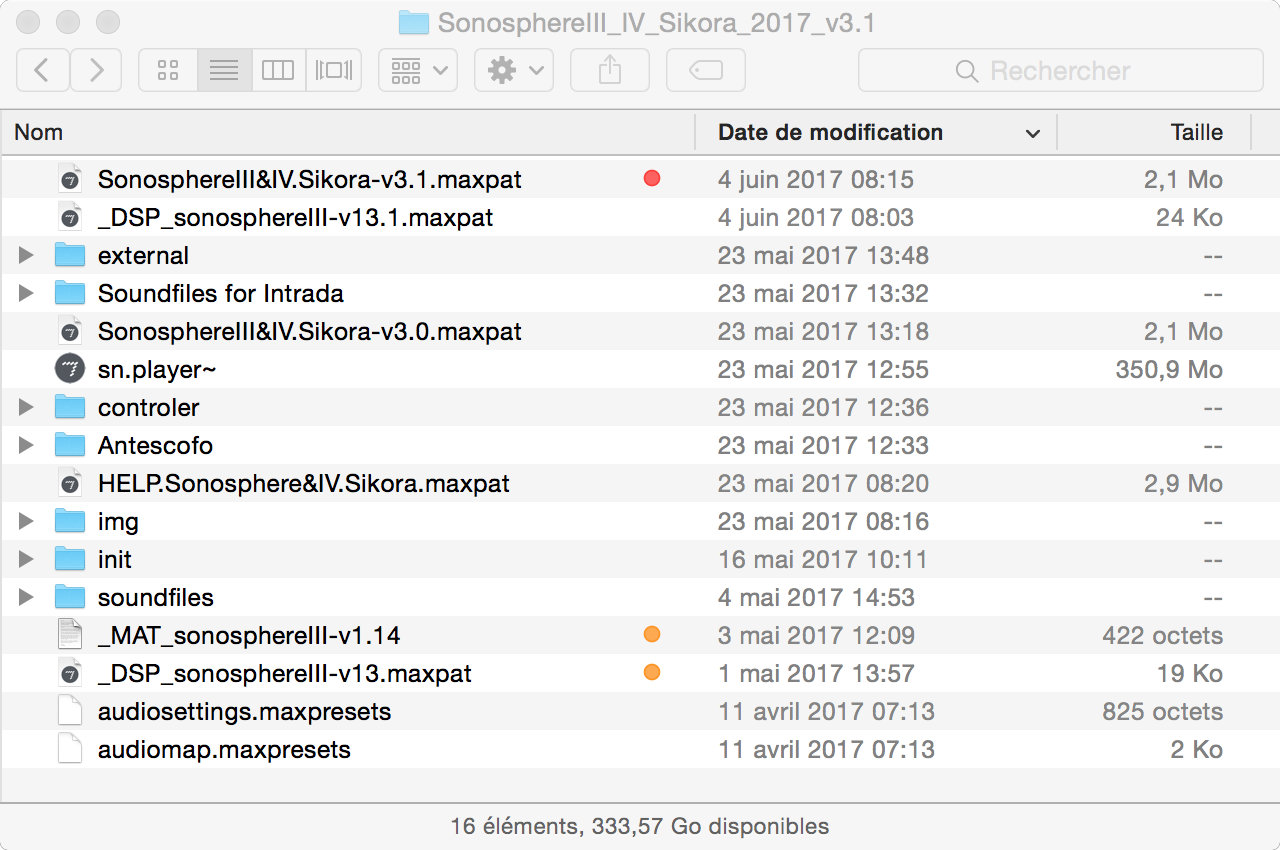 external : all objects and abstraction needed Soundfiles for Intrada : soundfiles that have to played in the foyer for the entrance of the audience in the hall. Controler : all datas that are used for the external controler Antescofo : all the scores load ine the antescofo engine. init : all the init.txt files loaded at the lauch of the patch. Soundfiles : all the soundfiles played during the piece by sn.player~.app Score and Antescofo : Two antescofo engines are instanciated. One execute all the processes according to the score. The second one is dedicated to tempo detection. Have a look on the scores in the Antescofo folder. Virtual Sound Check : Available.