Concert of the 40th anniversary of Ensemble InterContemporain.
Reduced version of the piece to last 6min maximum.
Convert the all-in-one folder to two Max projects (1 for Max 7 (effects), 1 for Max 6.1 (spatialization)).

Each of the computers has:

Click is not used by Alain Billard (clarinet) who knows very well the piece.

Here is diagram of the overall audio and MIDI setup: 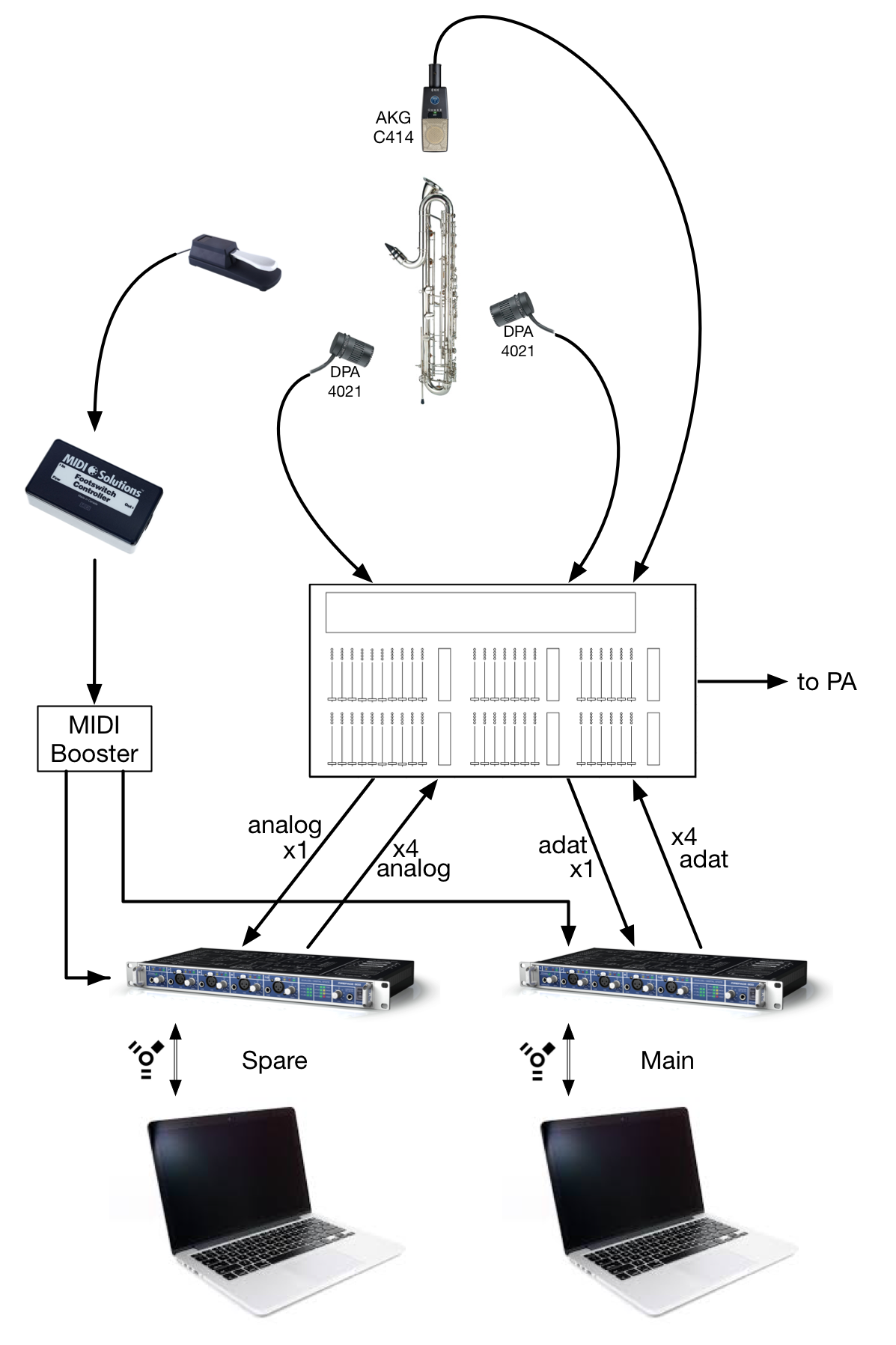 For this concert, we used 4 sets of speakers placed like a square around the audience : Front Left, Front Right, Back Left, Back Right

The clarinetist triggers the cues of the score/patch with a foot pedal sent in MIDI to the computer. When an analog footswitch or sustain pedal is used (as it was the case in this version) it needs to be converted to MIDI with a MIDI Solutions Footswitch Controller. If the console and computers are far away from the stage, a MIDI Booster is used to reinforce the MIDI transmission. It is used to duplicate the MIDI info for main and spare computers.

This version is composed of two Max Projects: 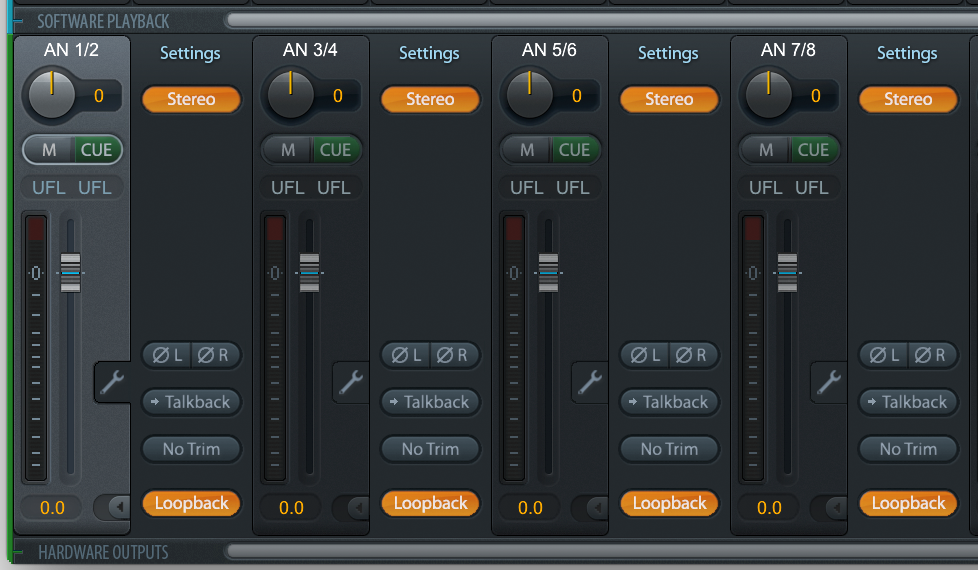 ejies objects and functions are required for the Max 7 project. Because of java(script) they could not be integrated directly into the project. You have to install them in your packages before opening the project. We used and provide ejies 3.2 in this version. You may update the ejies to the last version provided that it works with Max 7 32bits.

Except for the routing, no special Max setup is required for this piece. We use this standard setup :

The input level of both patches (Max 7 and Max 6) should be set rather high for the effects to work properly.
Two soundfiles can be used as a simulation to quickly test the patch without the clarinetist. CLCB-sectA_05-diff.aifis a recording of the first 28 bars of the piece. CLCB-sectB-37_49-diff.aif is a recording of the bars 37 to 49.

When launching the two projects, you can check for errors in the Max window.

Once you have loaded both Max 6 & 7 projects: 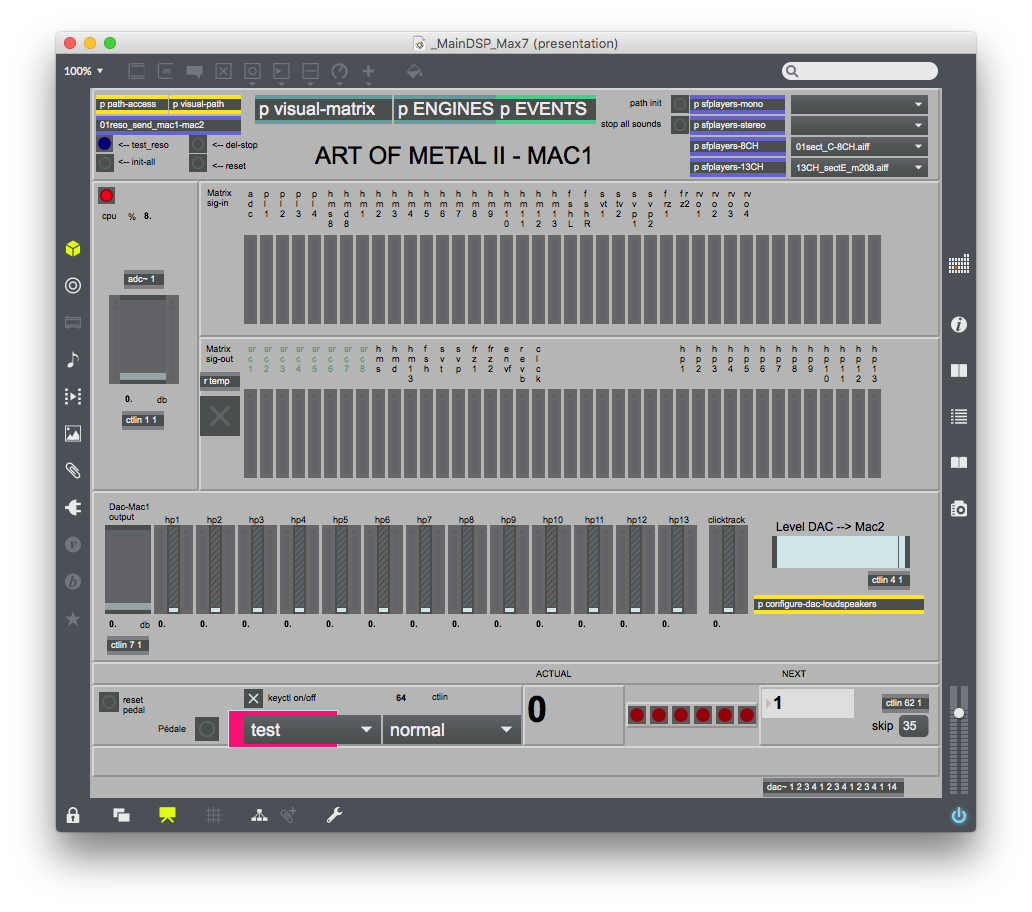 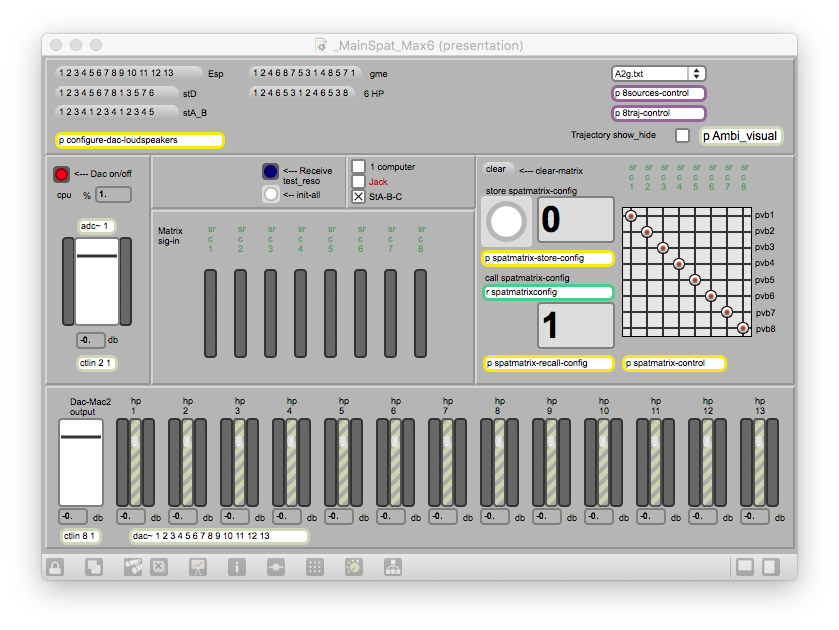 For timing purposes, this version was played with a cut between cue 27 (bar 155) and cue 35 (bar 178). A shortcut (shown below) has been added to the main Max 7 patch for the computer music designer.
Once the performer has triggered and played cue 27 (which cuts off all the electronics), click on the 35 button shown below to prepare the cut. When the performer is ready to start again, he/she has to trigger cue 35 with the foot pedal.

In general, Yann Robin likes when the sound coming from the computer is loud in the room! Adjust the volume consequently!