Reprise of the piece for "Fête de la science" at Jussieu. Produced by Collegium Musicæ. Second reprise at Sorbonne University.
No clean-up of the patch was done after the premiere. This version was made mainly to get a readable patch with only useful dependencies.

No other version available

No speaker or mixing console is required for this piece. The SmartGuitar is used to output all the electronic part including pre-recorded samples. 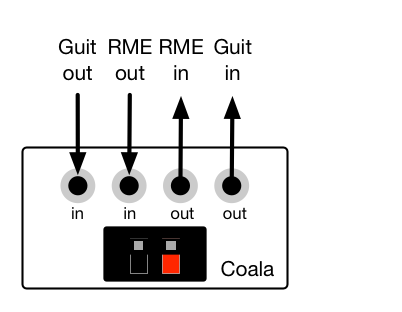 This version is a Max Project running with Max 6.1 32bits. You only need Max 6.1 32bits and a terminal with 'ssh' command to run it. Except for Sampling rate (44.1kHz which correspond to the sample rate of the sound files used), no special Max setup is required for this piece. We use this standard setup :

Along the piece, the score following system for the electronic part is shared between the Antescofo~ system and the Computer Music Designer (CMD). Space Bar indications are written along the score. They should be executed by the CMD. Some of these cues directly trigger some effects/files, some other switch on/off the score follower system.

The current cue and next cue are shown in the main patch interface so that the CMD can monitor the correct following of the score. Left and right arrows can (and should) be used to jump backward or forward if the score following is not correct. As the guitar sound and the electronic part both sound in the physical instrument (the smartguitar), errors in the automatic following happen often. The CMD has to really watch out for that.